What Is A PRO and Why Should Artists Care? 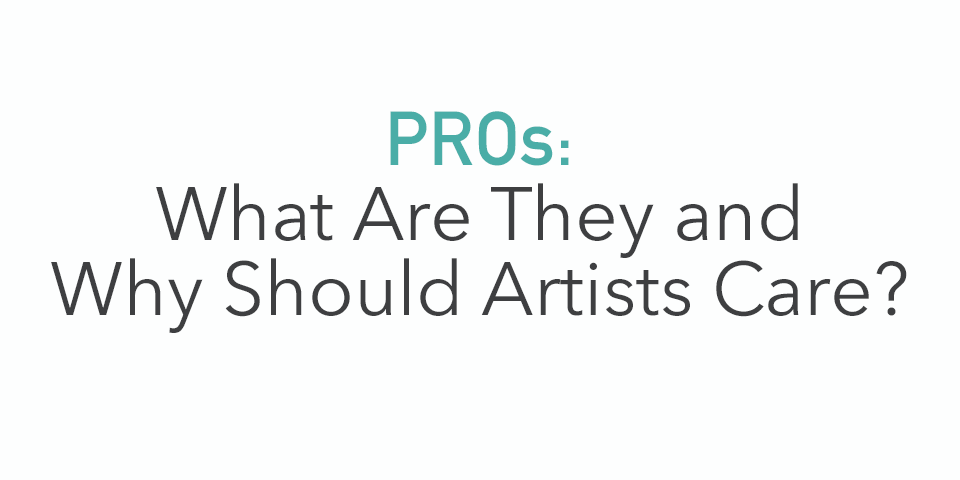 This is the first part of an ongoing series to empower artists with the knowledge and resources they need to successfully navigate the music industry.

At MAX we believe strongly in creating technologies that more efficiently enable artists to build sustainable careers on their own terms. Much of what we do involves programs that generate radio play (and subsequently potential revenue via Public Performance royalties) for the artists with whom we work.

The music business is full of strange abbreviations and terms that seem both oddly outdated and specific. I’ve long held that these arcane terms create an information asymmetry that keeps artists on the wrong end of a power dynamic with labels and publishers.

Thus, in an era in which terminology is apparently fungible AND artists increasingly cannot afford to miss out on any potential piece of revenue, it’s important for artists to understand both the meanings and impact of these terms.

As mentioned in the intro, we will explore numerous terms in this space, but I’m starting with one of the most important: PROs.

What Is A PRO?

In the United States, one of the exclusive rights that copyright holders are granted is the right to “publicly perform” their work. This phrase, “publicly perform,” is confusing in and of itself.

While the natural connotation of this phrase relates to an artist standing on a stage and singing their song, it also refers to any time a songwriter’s work is broadcast - whether live or recorded - in a setting where a group of non-family members could potentially hear the work.

This includes the background music of a TV show, a song on the radio, a song streamed on Pandora, a song that is played via a CD in a restaurant, etc., etc.

Any time this type of public performance occurs, unless there’s an agreement between the party that broadcasts / publicly performs the work and the copyright holder of the composition, the party publicly performing/broadcasting is potentially infringing on the exclusive rights of the writer/publisher.

Generally, the party that broadcasts a public performance would be a radio station, a tv station, a bar, or an online streaming service. The copyright holder is typically the songwriter.

For example, if a radio station plays a song without an agreement in place with the writer or publisher of that song, that radio station may be infringing on the writer/publisher’s right to publicly perform. It’s the same deal with a tv station or a bar or an online streaming service (but NOT a movie theater; they are exempt?!).

Why do artists affiliate with a PRO?

In order to avoid infringement claims, a license is required between the party who desires to broadcast the work and the writer who controls the right of public performance.

However, if every radio station, venue, streaming service, etc. had to negotiate individual licenses with songwriters, it would obviously be a long, expensive, and difficult process.

These difficulties in issuing the necessary licenses at scale have been historically resolved by clearinghouse agencies known as Performance Rights Organizations (PROs). In the US, there are three main PROs: ASCAP, BMI, SESAC. These agencies issue so-called “Blanket Licenses” to any entity that desires to publicly perform copyrighted works: venues, radio stations, TV networks, restaurants, streaming services, etc.

Once a writer/publisher affiliates with a PRO and fills out the forms for songs that are or will be broadcast, the writer/publisher is eligible to be paid a percentage of the money collected from the PROs for the blanket license fees they’ve issued, the amount of which varies depending on how much actual and projected public performance the PRO calculates.

It is not an exact science.

In fact, many writers still refer to the money they receive as “mailbox money,” because it’s sort of like getting a card in the mail from Grandma with a ten dollar bill folded inside. Most writers, irrespective of how much or little money they receive, never fully understand precisely why or how they’re getting the money.

The Future of Performance Rights Organizations?

I strongly believe that the excuses PROs make with respect to inaccurate payouts and overall licensing schemes are increasingly tenuous. New technologies, such as Blockchain, could allow for vastly more efficient direct licensing and transactions between those who hold the copyright to the work and those who desire to use the work with no intermediary.

Until these technologies become more prevalent, it is IMPERATIVE that writers of music both understand their rights with respect to Public Performance and do all they can to maximize revenue from these usages.

MAX is here to help artists understand these opportunities; we plan to continue offering best practices and guidance in this area. Please leave questions and comments below. We’re eager to begin a dialogue.