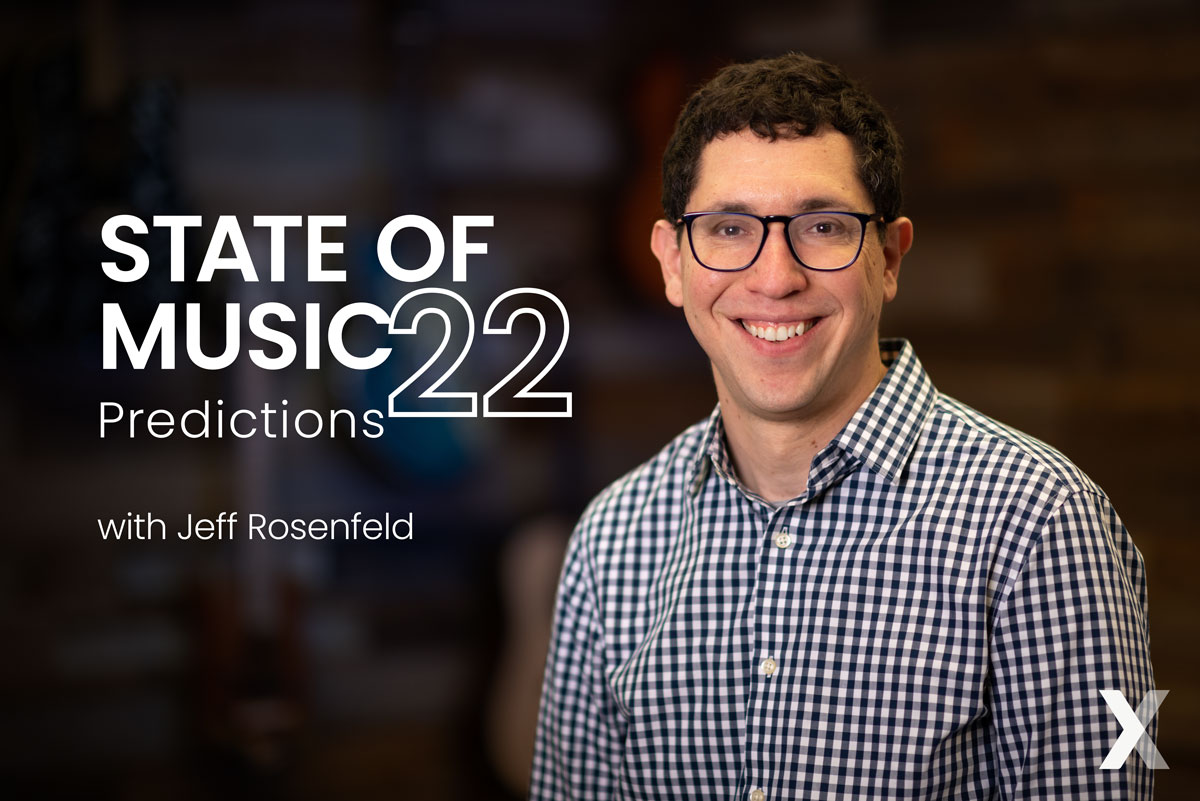 This week’s predictions come from our Sr. VP of Product and Technology, Jeff Rosenfeld. On top of being an expert in his field, Jeff is an artist himself, giving him a unique perspective on what the state of music will look like in 2022.

"Looking back at my predictions for the year, I'd say I did really well:

1) I argued that artists would tire of being beholden to social media algorithms and start to own their own data. While it remains to be seen how many artists will do something about it, a survey of 1500 social media creators published in October of this year shows that creatives may have finally hit their breaking point with "70% saying they feel screwed by the big tech platforms" and 75% saying they feel "punished" by the algorithm if they don't constantly post new content.

2) Despite a lot of hype about NFTs in January of 2022, I was skeptical that they'd be the next big thing in music. Over the course of the year, we saw declining sales volumes of NFTs (averaging only 10k transactions per month globally by the end of the year) and a cratering in the median music NFT price (down 95% since the start of the year).

3) I also expressed skepticism about another much-hyped tech trend at the start of the year: the metaverse. Despite all the buzz, VR headset sales were down in 2022 from 2021 and no new platforms have shown any sizable growth nor have anyone buzzing. Future innovations may change the trajectory of the space, but my prediction for 2022 was a solid one.

4) I predicted "live music was going to come back strong" and was correct. Ticket sales through the first three quarters of the year were up 37% from the same period in 2019. Fans were excited to see their favorite artists live and in person, and artists were thrilled to perform for their fans.

5) I predicted that TikTok would continue to drive music discovery and would lead to old songs being rediscovered and going viral. Then, in May, we saw Kate Bush's "Running Up That Hill" explode in popularity on TikTok after being featured in Stranger Things. It cracked the top 10 in charts around the world 37 years after its original release. Also charting due to TikTok were catalog tracks by Caroline Polachek, DJ Khaled, and Pharrell Williams."

Are there any predictions about music/marketing/social/tech that have been on your mind going into 2022?

"We’re actually in the middle of conducting a study that focuses on these areas, so I don’t want to make wild speculations when we’re still in the middle of the study, but there are some trend lines that we’re focusing on and we should have more definitive answers soon. The thing about making a prediction is the more interesting it is, the less likely it is."

What are some of the challenges that music artists face in 2022 and how do they influence how you think about product development (from either a developer or a user standpoint)?

"I think it's becoming more and more important for artists to build a direct relationship with their fans. Throughout the pandemic, artists have utilized technology to find new ways to connect with people, mostly through social media platforms, but a lot of artists don’t want to have to rely on those platforms in order to connect with fans. There’s no guarantee that TikTok or Facebook is going to show artists’ content to their fans, even if fans have chosen to follow their accounts. More and more, artists are having to pay social media companies to ensure their content is shown to their existing followers. Artists need to start owning their fan data and managing that relationship directly rather than rely on the changing algorithms of social media platforms."

So, the pandemic brought about new ways for artists to connect digitally, and you see that connection with fans becoming more direct?

"During the pandemic, a lot of artists spent time with their fans over social, building and strengthening relationships. Walls felt like they were coming down and fans felt much closer to their favorite artists. Fans have grown to expect some degree of personal connection and artists need to be wary of social media companies owning those relationships."

What does owning the relationship with your fans outside of social media look like?

"Artists can connect through email, texting, digital fanclubs, custom platforms, it really depends on how your fans prefer to communicate, so it’s important to really know and understand your core fans. Once you do know who your core fans are, and figure out what they are interested in, you can create unique experiences for them, specialized merch, instead of just hoping that Facebook or TikTok shows your stuff to fans and hoping that they like it."

Thoughts on NFT fanbases? Or is that separate from owning the relationship?

"There’s some degree of correlation. Artists can maintain a community of people who own an NFT as a part of owning the relationship with their fans. For example, if an artist launches an NFT, they could specify that anyone who owns it can be part of a backstage meet & greet or can get into a show for free. Fans would also have the chance to resell that NFT and the artist would still make some money off of that. I have doubts if NFTs are a good solution for every artist, though. With crypto, there’s a learning curve, and transaction fees today can be high. Some people are going to be interested in NFTs from music artists - particularly iconic ones -but not everyone will be, and you don’t really need the blockchain to create a fanclub or fan platform. Because only the artist has to verify who has fan club membership, they do not need the blockchain for proof of ownership; they have their own database. Once again, it comes down to understanding your fan base to decide if it’s for you."

What do you think live music will look like in 2022?

"This is one area where we’re doing research, but my hunch is that live music is going to come back strong in 2022. People are excited about seeing their favorite artists again."

What kinds of experiences will people expect out of live music events in 2022?

"I think that fans will still expect to have a direct relationship with artists when concerts return. People have gotten used to that direct, interactive relationship and they want a way to interact with artists at live shows outside of hollering and hoping for attention. I’m excited to keep developing tools and solutions that allow artists to be creative and engage with their fans in live situations. This will help artists understand their fans even more too - ticket companies don’t like to share info with artists any more than social media companies do.

"I don’t want to say too much without the full data represented, but one of the things we’re looking at right now is how different generations see their relationships with music and artists. Is music art that you listen to or is the song only a part something you directly connect with?"

"TikTok is a big contributor to music discovery right now and that will continue. And it’s a mixture of new music and old music - a song from the 60s just went viral and a whole new group of people are discovering it right now.

"The way people discover music on TikTok is unique too. Sometimes, people discover music incidentally (when a song is the soundtrack to viral videos or a trend), other times it’s through artists directly promoting their songs. There are artists finding creative ways to promote songs through content that’s compelling, sometimes even making people feel like they’re part of the creation of the song."

We’ve all seen the numbers showing just how big catalog was in music consumption in 2021. Will catalog stay strong in 2022?

"The strength of catalog is that it’s a lot of songs that people already know and love. People like to listen to the same music over and over. For a lot of people, they just stop listening to new music at a certain age, so catalog is their comfort zone. Previously, you would listen to catalog songs over and over on media like a CD, but now those repeated plays show up streaming data. I do think TikTok will continue to be a mix of new and old music, and for some younger users, the older music is new music to them. Old music could be that song from the 1960s or an album track from 3 years ago."

Another buzzy topic is the metaverse. Any thoughts on that?

"This is another area where we’re looking to gauge real interest among fans through our research. Companies that need a new frontier like Meta or Microsoft are going to keep pushing the metaverse a lot, but I don’t see people clamoring to be in a virtual space after being cooped up for so long. Artists who create a digital space for fans to interact, people will probably love, but in general, the metaverse is not something people are excited about in their everyday lives. People are looking for real life, human connection.

"Twitch is a great example of people looking for a human connection outside of the virtual world of the game. Even when watching someone playing in a virtual world, the real draw is the person playing the game."

Next week, we’ll talk with our Director of Advertising Operations, Sean Hozumi, to get his expert opinion on the state of music in 2022. And as always, if you have any questions you’d like to see answered by any of our featured experts, comment below or email us at marketing@musicaudience.net.